I'm reposting this because it happens to be one of the most popular on this blog. (I'm able to log in and see how many views it has.) Seems that folks like a good wedding fight! Just like the WWE!

I once co-owned a mobile deejay business with a partner when I was on radio in South Florida.  It was called "Hot Summer Nights." A fitting name for a Florida entertainment company we thought. We would book company Christmas parties, birthdays, weddings, you name it.  Pretty much any occasion where music was needed to light up the crowd for a good time. Coming from my radio background, mobile deejaying was extra fun, as I could actually see my "audience"...unlike radio.

Weddings were a challenge as the guests in attendance at the reception were everyone from the bride and groom to little children, teens, and in most cases, Mom and Dad and Grandpa and Grandma. So you were playing music to a wide age range. You had to have  something for everyone and keep them all happy. And by all means, DON'T play any unfamiliar music that folks didn't know. That would make the dance floor empty quickly. And you might get a dissatisfied look from the bride or groom. For the most part, I played the hits and kept the good vibe going.

Before the wedding, I would always meet with the bride and groom (and sometimes their parents) to discuss exactly what song selections they wanted played... or didn't want played. Which brings me to what this post is all about.

By far, a particular Italian wedding was one of, if not thee most, bizarre weddings I ever deejayed. I met beforehand with the bride and her Mom. Right off the bat, I knew this event was going to have its "unique challenges." The mother said, "My creepy ex-husband is going to be at the reception. If he comes up to make a request, DON'T play it!" Alrighty then. "Also," she went on to say, "An uncle and nephew have very bad blood and they'll be at the reception . Hopefully, there won't be any problems." After Mom gave me a 50%  cash deposit to deejay the event, I left our meeting driving home with all kinds of weird scenes playing out in my head; most of them not good.

Fast forward to the wedding reception. It was your typical hot Summer, South Florida day. The couple had rented out a large party room at a West Palm Beach golf course on a Saturday. My assistant for the day helped me set up my deejay equipment. Soon, guests started filing in. It was a very large and lively crowd. I fired up some music and things got rolling. The dance floor was filling up nicely. That was always good to see. Just trying to keep everyone happy. Drinks were flowing freely as the crowd loosened up. Midway through the reception, the bride's Mom came up to me and handed me the balance due in cash and walked away. I told my helper/assistant to play the music as I wanted to step into the men's room and count the cash to make sure all was paid. Upon exiting, I saw fists flying from all corners and utter mayhem breaking loose, as the nephew and uncle I had been warned about had gotten into a push and shove match, with others stepping in to take a few swipes at the nephew, who apparently had a history of run-ins with the law and stirring up issues with the family. A chef came out of the kitchen and tried to get things under control. But the free for all fight kept rolling. I honestly thought someone might pull a knife or gun. I think I even saw Grandma  trying to get in a punch or two at the nephew, people yelling  and taking sides.  And at one point, I feared for my deejay equipment as a tidal wave of people was moving in my direction with little regard for my set-up. Things got so out of hand, someone called the police. The first cop that showed up looked like Barney Fife from the old Mayberry TV show. He looked like he weighed just shy of 130 pounds! I thought, "There's no way this guy is going to be able to get this angry crowd under control." Soon, more officers arrived in the parking lot before running into the reception area. I stepped out to the lot to see a middle aged man punching one of the guests who fell to the pavement. It was all very surreal. Like out of a movie. Or the phony WWE with all their staged wrestling fights on TV. And sadly, the bride had taken a seat in the limo with an open door and was sobbing hysterically, saying, "They've ruined my day!"  I truly felt badly for her. Eventually, things settled down and my assistant and I broke down our deejay equipment and left the "festivities." I was relieved to be on the road. Time to get home for a cold beer. Or maybe a couple.

Later that evening, my business partner called and asked me how the wedding went. I told him he would be deejaying the next wedding we booked. I needed a short "vacation." 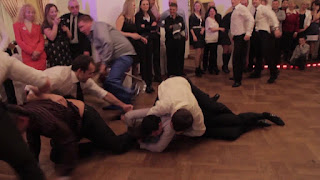