How is your stuff doing these days?

In my early days of radio broadcasting, I was constantly moving to the next opportunity. U-Haul and I were the best of friends. I usually rented the smallest truck. I made it a rule not to hang on to useless clutter that I would have to senselessly move to my next town. Besides, most of the time when they hired you, they'd want you there in days...not weeks.

Which brings me to the fine art of clutter. Some folks are really good at it. I don't have a lot of that here at my place as I've never been a "things" person. I'm allergic to malls. A few months ago, I went down to my carport storage, unlocked the door for the first time in years, and saw a few big Tupperware containers which I had forgotten I had down there. Much to my surprise, there was a shoe box crammed with cassette tapes of my old radio shows. I took the box out and went back upstairs to my living room where I could see dates on the cassettes; some of them dating back to the mid 80's! Not having a cassette player, I called a friend who had one, and she gladly loaned it to me. Playing the tapes of my early radio shows was kind of weird. Some of my on-air antics were cool; others I was less impressed with. Time gives you a whole different perspective. I even had a recording of a couple of actors who visited my studio for a live, on-air interview from "Greater Tuna," a very funny show featuring Joe Sears and Jaston Williams; a comedic play set in the fictional town of Tuna, Texas, the "third- smallest" town in the state.

After listening, I was going to put the cassettes in a closet, when it occurred to me, I would probably never be listening to them again. All of this was from my past, and it had very little sentimental value to me. I took the entire box, cassettes and all, and threw them in the garbage can for Monday morning pickup. See how easy that was? Something clicked, and it made me feel good.

I went through my closet and found like new pants and other clothes I will never wear. Off  they went to my neighborhood Goodwill. "Ahhhh...much better now."

I was reading a book by one of my favorite British authors, Stuart Wilde, where he speaks about decluttering our lives and making way for the new and the good that's coming to you. I'm a firm believer. Less, not more, is the way to go.

Some people just can't imagine throwing their useless junk away; they seem attached to it. And I'm not talking about hoarders.  Even though they've never touched it in years, there it sits taking up space and collecting dust.  And God forbid they should have to move. That'll take days to relocate all the stuff they never use. They'll have to rent out that jumbo sized U-Haul you see around town to get all that junk to a new location; and beg family and friends to help them move all that crap stuff into and out of the truck. Insane, I say. Get rid of it already! You'll feel much better. And "lighter." Out with the old...in with the new! 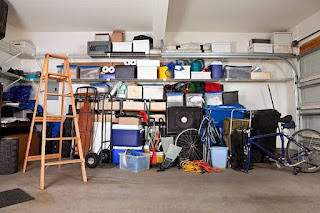