The recent passing of Burt Reynolds put me in a very reflective mood. 1985-1986 were especially exciting years for me as an on air talent. I was on WIRK, a heritage country music station doing a midday show. Burt's people at his ranch in Jupiter, Florida approached our management team with the idea of building a broadcast studio in his gift/souvenir store, and  relaying the signal back to our main station, and then out across the South Florida airwaves.  I was in the right place at the right time. My daily routine consisted of driving to the main radio station in the morning, picking up commercial and music logs for that day, then driving twenty some miles up the Florida turnpike to the ranch studio to do my show. I interviewed lots of recording artists as well as celebrities-many of them friends of Burt's. One time, he showed up at the studio to do an interview with me and you would never have known you were talking to a very big movie star.  He was very real and gracious with his time. Here's a postcard I held on to through the years from his gift store. R.I.P. Burt. And thanks for being so kind. 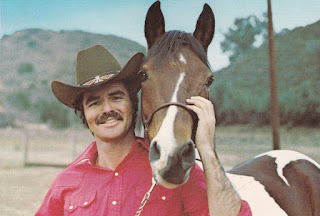 I remember a little trip out there , that was a beautiful place and a really nice vacation . My favorite was The treehouse and very nice 7day Cruise afterwards . Hello stranger guess who I hope you been doing well . You look good and sounds like you're doing good which I'm not surprised about that you always did have a drive . LoL . And for me I'm back in North Carolina and happily married to great guy and getting fat and old .

Hmmmmm. You have me stumped. :) "Hello stranger. Guess who?"

Congrats on the happy marriage!