To sit or stand. That is thee question

If you visit any of the many voice over forums online, you'll see conversations about whether to sit or stand as you are recording a voice over. We've all read articles about how unhealthy it is to sit for prolonged periods of time. But beyond that, I believe standing as you record has some solid advantages. However, as always, there are exceptions. If you are narrating an audio book or a lengthy e Learning module, you are more than likely going to sit. But for commercial work, I think standing is the way to go, especially if the copy is quite energized. Sitting while recording an uptempo car commercial would likely hamper you. You need to stand to put some motion into the read with your body. Lately, I've decided to stand in my booth. I do a lot of sitting editing the audio after recording.

Bottom line-there is no right or wrong way. Whatever allows you to give your best performance.

Here's a link to a good article on CNN.com about standing desks.

Posted by John Miles at 6:30 AM No comments:

Email ThisBlogThis!Share to TwitterShare to FacebookShare to Pinterest
Labels: Lifestyles, Voice over

I read a book once where the author said, "Seeing people for who they REALLY are is one of the most valuable and profitable things you can do in life."

There's no avoiding them. They pop up at work, school, a rude ("I hate my job") cashier at your local convenience store, a friend, church services, sports events, family gatherings, competitive singing TV shows ... you name it. Thank goodness there are proven methods you can use to banish them forever, or at least minimize the irritation they bring into your otherwise generally pleasant day.

Recently, in a phone chit chat with a  friend, I mentioned another friend of mine in her mid 70's, has become a certified, undeniable, energy vampire. She has two moods---grumpy and grumpier. I LOVE the term...energy vampire... as I have encountered a number of them over the years, and it seems like such a good description. Just in case you're out of the loop, an energy vampire is defined as:

(Break out the garlic and sharp, wooden stakes).

According to Psych Central, energy vampires tend to be emotionally immature, self-centered and lack empathy.

The million dollar question is "How do you deal with energy vampires who suck you of your energy?"

Some suggestions are: hang out in groups of three or more, stick to light topics when chatting, lend an ear, reduce contact, and cut them out of your life.

A retired friend I've known for years is a "triple play threat." An energy vampire, naysayer, and hater. (Other than that, she's a great gal!) Sometimes the phone rings,  I see her name on caller ID, and I just can't answer the phone. One afternoon, I was "treated" to her ear shattering, 1000 decibel screech about how awful Kelly Clarkson dresses on her afternoon TV talk show. I let her rant for a bit, then told her she can always change the channel. "Just grab that little black thing we call a 'remote,' and change the channel." What an idea! Nope. That flies right over her head. I'm positive she enjoys the hating way too much.  Another time, it was about Good Morning America's host, former football player, Michael Strahan, and how much she hates the gap in his front teeth. I informed her that some viewers like the gap, and some don't, as I heard him say one morning on the show. That launched another shout down on the phone, to which I tried to change the subject quickly---"WOW. How about this great weather we're having!" Or, "How about those Warriors and Steph Curry. They kicked butt last night!" That was met with a typical, monotone, Debbie Downer from her, "I don't watch men's basketball John." OKKKK! Sour pusses will be sour pusses, I guess. Just trying to elevate the conversation.

I had a few naysayers, when I told them I was going to go to radio/broadcast school to learn to become a deejay, at the age of 18. "Oh really? (sarcastic chuckle), let us know how THAT works out." In a way, that kind of drove me. "When life gives you lemons, make lemonade." Those types of discouraging comments can put a bit of a chip on your shoulder. But it turned out to be good. I had a very satisfying on-air career for 20+ years in places like West Palm Beach, Charlotte, Akron-Canton, Miami, Joplin ("Oh no! Another tornado!") and met many recording artists and celebrities; most of them very nice to talk to. I also worked alongside some very talented people and learned a lot. Meeting the often outspoken station listeners was cool too. "You guys play too many commercials and you play the same songs over and over!"

As for the haters who are often insecure and get enjoyment out of trying to marginalize your success by knocking you down a peg or two, ignoring them or removing them from your life, is a very useful option. I have an attention seeking brother-in-law who for some reason likes to play the hater card on me; childish, verbal attacks. Jealousy comes to mind; a very common hater trait. We rarely see each other, but at family funerals. My technique? Simple; I ignore. The contrived drama that is thrown my way goes in one ear and out the other. And this is coming from a man of supposed high intellect who is a director at an institute of a well known university! Go figure.

Backhanded/patronizing comments are definitely a part of the hater toolbox. A sassy co-worker in the coffee break room who says, "Hey (fill in the name), NICE shoes! Where'd you get them, Pay Less?" Wouldn't you just love to stick a bagel in her yapper.

Wanna bring your haters out of the woodwork? As in by the dozens? Hit the Powerball jackpot.  As the old Bachman Turner Overdrive song lyric goes, "You ain't seen nothin' yet!" People you thought were your friends/family will be seething with jealousy. Not your fault the lottery Gods showered their good luck down on you! By the way, as I write this post, the current jackpot stands at $450 million ; worthy of at least a one ticket purchase. Yep, I'm on that lottery playing train: "If it's meant to be, it's meant to be. All you need is one ticket."

This post is getting long, so I'll skip a lengthy chat about the gaslighters. You probably know what challenges they present. If you don't, Google the term. I can tell you from experience to watch out for the "tag team" husband and wife gaslighters. They love to work together with a plan, and have it down to a science. Bullies. Two against one.

As you go up the ladder in your profession of choice, these kinds of sad and sorry people will try to take cheap shots at your success and bring you down. March on. Ignore. Smile. Your daily success will be your victory. Land that next voice-over job. When you do, celebrate a bit. You deserve it! 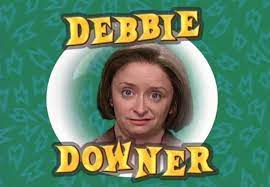