"Let's Get Ready To Rummmble!" (No, this is not about your family's last holiday get together)

Years ago, I received an email from a gentleman who wanted me to record a TV commercial for him. As I remember, it was for a small/medium sized market. I asked him to email me the copy before I committed to recording it for him. I immediately noticed the copy contained the phrase "Let's Get Ready To Rumble!" I had read somewhere that the phrase had been trademarked by boxing announcer extraordinaire, Michael Buffer. If you watch sporting events, you've no doubt heard his over the top announcement at the beginning of a boxing match.  (Pic down below). He gets between $25,000 to $100,000 to say those five words, depending on the match! Yep. How sweet is that? He had the phrase trademarked back in 1992, and since then, it's been used in movies, TV shows, video games, Washington political hearings and beyond. (OK. I made that last part up, but it IS fitting).  In fact, it's estimated he's made $400,000,000 to date off the phrase. He and his company vigorously enforce the legal use of it.  He's actually made more off the licensing than ring announcing.

Back to that customer who wanted me to say the phrase in his TV commercial. I emailed him back and clued him in. He had no idea it had been trademarked.  We went with some variation of "Let's Get Ready To Rumble!" and all was well.

This reminds me of the Wendy's TV commercial back in the 80's with Clara Peller-the onscreen, feisty, grandma known for her gripe, "Where's the Beef?!" Humorous, to say the least. Back then, the phrase caught wildfire and was being heard and seen everywhere; including on a huge bunch of tee shirts. Wendy's trademarked it back in 1984. I interviewed Clara on my radio show when I was on in West Palm Beach . She and her manager son were in town that weekend for a Senior Olympics event. Clara was extremely hard of hearing, and the story goes that when she was taping a TV commercial, with a few other grandmas standing behind a counter with her, a producer hidden down below tapped her on the ankle to bark those famous words "Where's the Beef?!" right on cue.

Now all you and I have to do is come up with another catchy marketing phrase that everyone wants and trademark it. I'll give you 50 percent. You in? 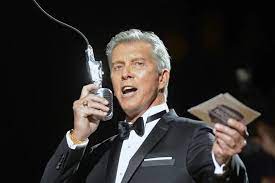