The tale of George Foreman and his mighty grill

I was watching TV in the afternoon recently and almost fell off my chair when George Foreman came on a TV commercial for one of those Medicare benefits companies. According to celebrity net worth, and other sources, ol' George is worth somewhere around $300,000,000. In the commercial, with bubbling enthusiasm, George says, "Do like I did! Call the Medicare Helpline at the number on the screen to claim your extra $1700 a year in benefits!" I don't know about you but the idea of a guy who's worth 300 million dollars (good for him by the way) calling a helpline to claim an extra $1700 a year, is a bit laughable, and I dare say, unbelievable. The cynic in me thinks, "C'mon George. You didn't call the helpline and you know it." LOL. No issues with him doing the commercial at all. And I hope it genuinely helps people who could use the extra money. It's just that the premise makes me chuckle a bit. Oh well, when did TV commercials stop stretching the truth.

So, where did George earn the bulk of that fortune?  If you guessed boxing,guess again.
According to trusted sources...
"George was being paid  about 40 percent of the profits on each grill sold, earning him $4.5 million a MONTH in payouts at its peak, so it is estimated he made a total of over $200 million for the endorsement, a sum that is substantially more than he earned as a boxer." Ya think?
The kicker is, the grill endorsement was originally offered to Hulk Hogan (Terry Eugene Bollea), the wrestling god, who turned it down, and the endorsement was then offered to George.  Instead, Hulk endorsed the "Hulkamania Meatball Maker"which failed in the market.
So, just a common sense warning. If you ever run into Hulk Hogan, don't bring up the George Foreman Grill. He's likely to body slam you or put you in a nasty choke hold on the spot. That could be really embarrassing. And it might mess up your really expensive shoes. 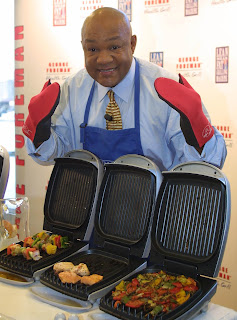