"Set It and Forget It!" and "Mr. Microphone"

So, I hadn't seen Ron Popeil in a very long time and thought he had moved on to that big infomercial lounger in the sky a while back.  That is, until he passed away recently. Some of you reading this are very young and asking, "Who's Ron Popeil?" I would say one of the most successful marketers of all time. Everything he touched turned to gold. (OK. He had a few flops, but not many). He was known for inventing and TV marketing unique products; many of them in the over millions sold category. In case you've forgotten, here's a partial list of some of his hits:

3. Mr. Microphone  (The TV commercial for this one was absolutely hilarious. Hey, he sold over a million of them! I have the link to the commercial at the very bottom of this post. )

4. Smokeless Ashtray (Just what my Mom needed when Dad broke out his cigars in the living room.)

9. Showtime Rotisserie and BBQ Oven  ("Set It and Forget It!")

I took a few moments to check out some of his old TV infomercials on You Tube, and not only was he an inventing genius, he was quite funny in how he pitched his products on air.  As a kid, I watched many of his TV infomercials over and over again that just kind of drew your attention in.

I read his thoughts on being successful with his sales pitches and he said "Find out what people need and want and market to that."

Many of today's infomercials have taken their cue from him as to how to produce their shows. He seemed to always have a bonus to throw in with the deal. Famous for, "But wait! There's more!" (If you're desperately dating someone, say that at the end of the night.  OK, maybe not.)

It's estimated he sold over a billion dollars of products through the course of his career. That's a lot of Veg-O-Matics. 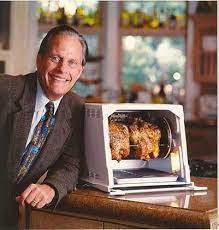