OK. OK. I know. These days there's a lot of chatter and gossip about Jim Nantz' new contract with CBS. He's reportedly been making 6.5 million annually. And some so called "sources" say he'll be making 10.5 million per year going forward. Love the guy on NFL football games and his annual Masters coverage. Great voice. Great talent. Always a class act. He deserves every penny. But that's not totally what this blog post is about.

The cat's out of the bag now. And his legion of fans will  be seeing him through a whole different light from now on. Somebody spilled the beans. This may come off as a tad gossipy, but I think you REALLY need to know.  Well... I wasn't going to say anything but... Ready? OK, here goes...

(whispering) Jim Nantz is a huge breakfast fan and he likes his toast BURNT! "Charred" would be another word. And he admits to carrying a small, laminated picture in his wallet showing a burnt piece of whole wheat toast so his restaurant server and cook can get it right.  I think I read his wife gave him the pic. Ya know, there's nothing worse than living with a grump who's always complaining about a burnt toast fail.  And yes, by all means, the server has Jim's permission to take the pic back in the kitchen to show the cook just how burnt he wants it to be. Not a little bit burnt. A whole lot burnt! Apparently, some cooks haven't been burning his toast thoroughly enough. Maybe they were worried about setting off the fire alarms.

Here's an idea, but don't hold me to it. The next televised golf tournament , see if you can catch up to him as he heads to the broadcast tower. No small feat. If you're lucky enough to do that, don't ask him for his autograph. Say loudly for all to hear, "Mr. Nantz. I love your work. Now, can I see your burnt toast picture? I know you take it with you everywhere you go. I read about it on some voice over guy's blog."

Then email me and let me know how that turned out. 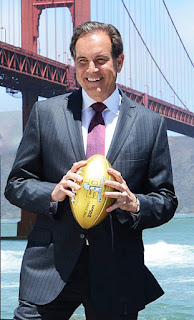