The angry golfer (don't be one...please)

My Dad taught me to play golf at a very early age. He would always have golf on TV on Sundays after church. I thought it was dreadful and boring to watch. That is, until he invited me one weekend afternoon to join him to play my very first round of golf. I was very fidgety and nervous on the first tee as Dad showed me how to grip the club and stand toward the ball. (Commonly referred to as "addressing the ball" for you non-golfers). At my "big moment of truth," I swung the club back and then down toward the ball and I think it rolled maybe 20 yards or so off the tee and down the fairway- a major disappointment. The ball never became airborne. I "chopped" my way toward the golf green and quickly realized it is a very difficult game. But through it all, I got hooked, and would eventually go on to become a pretty accomplished junior golfer in high school. Dad taught me proper golf course etiquette such as not talking while someone is putting, or being ready to hit your ball when it's your turn, so as not to slow the pace of play. On my high school team, there were several golf club throwers and angry players when things didn't go right. I was never one of those. While I wanted to play well, it was never that big a deal to me. Even the best have their on or off days. Playing with an angry golfer can be quite annoying. When witnessing a temper tantrum over the years (some from my own relatives) I have often wanted to say, "I don't know why you're SO upset, you're not that good a golfer."  But then, sound judgement prevails. I keep my mouth shut. Golf clubs can serve as lethal weapons indeed. Especially in the hands of an angry golfer. 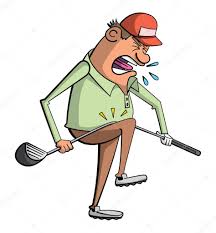