"The voice of Bart"

In the San Francisco Bay Area, if you were to ask someone who does the voice of Bart, he or she might ask you for clarification. Here, B.A.R.T. stands for Bay Area Rapid Transit. And as you wait on the platform for the train to come, you'll hear several voices announcing departure and arrival times. They're actually synthesized voices called, "George and Gracie." The history behind them is kind of fascinating. Read about them and hear a sample of their voices here.

Another suitable answer would be Nancy Cartwright. She's the voice of Bart Simpson. When the series first became a hit, many were surprised that Bart's voice was being done by a woman.

Years ago, Nancy took a big chance, packed up her beat up car in Dayton, Ohio, and headed to California. She was lucky enough to study under the legendary Daws Butler, a master of animation voices. He originated the voices of many famous cartoon characters, including Yogi Bear, Quick Draw McGraw, Snagglepuss and Huckleberry Hound. What an education she got from Mr. Butler. Not to mention landing  the gig of a lifetime. Her book, "My Life as a Ten Year Old Boy" is a fun and informative read.
Posted by John Miles at 7:51 AM 4 comments:

Email ThisBlogThis!Share to TwitterShare to FacebookShare to Pinterest
Labels: Voiceover

From time to time, someone will ask me what I mean by imaging, as it applies to the voice over world. The short answer is that it's the pre-recorded voice you hear promoting the upcoming newscast on your TV station ("Tonight at 10-find out where to buy the cheapest gas in your area!"). Or, the voice you hear between songs on your local radio station ("We play the most music! Star 104.7!"). It's what program directors use to "brand" their stations. There are many voice over talents who specialize in this type of work, and their voices are heard across the country on many stations or across networks. The money can be very good for exceptional talents in this niche of voice over.

One of the best  to ever come down the pike was Ernie Anderson. I grew up on the west side of Cleveland (Insert joke here) , and as a kid, use to watch Ernie on TV 8 as he hosted a scary/corny horror flick. He was "Hot in Cleveland" long before the current hit TV series with Betty White. Ernie went by the character name of Ghoulardi, and to say that his comedy bits were a bit strange and unpredictable is a huge understatement.

What's cool is, he used that local TV show as a springboard to launch an incredibly successful imaging career on national TV networks when he made the move to L.A. His voice would truly rattle your speakers. And believe it or not, some of his pre-recorded, generic, imaging liners are still being used by radio stations today, even though he died back in 1997. Many will remember him as the deep voiced "Love Boat" announcer.

Click on this link and then the other links you'll see to hear his amazing take on copy. Also, check out the video link you'll see to watch him and several other VO talents at work. The clip is very dated from an old L.A. TV magazine show, but still fun and interesting to watch.
Posted by John Miles at 11:47 AM 3 comments:

Email ThisBlogThis!Share to TwitterShare to FacebookShare to Pinterest
Labels: Voiceover

I enjoy walking in San Francisco, most often on weekends. But when I don't want to take our rapid transit up there and am looking for something closer to home, I hop in the car and head to this beauty of a lake a few miles from my studio. Here's a pic of Lake Chabot with wonderful walking paths on each side here in Castro Valley, California. You often see folks either fishing or boating on the lake, as well. 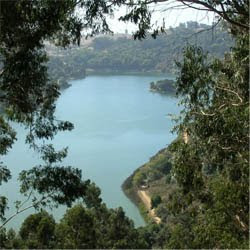 The direction was for lots of positive energy on this one. A direct response TV spot I voiced

Ryan in the voice over booth matching voice to picture. Ryan Seacrest does voice overs for American Idol season 10

Ministry related voice over for a rescue house

Folks sometimes ask me who I've voiced for. It's an interesting business. Some people only have need for an occasional voice over, say for their website landing page. Other clients have been with me for years. Here's just a partial list:

John Miles
Castro Valley, California, United States
I'm a San Francisco Bay Area voice talent specializing in corporate and commercial reads. Much of what I voice gets turned around the same day I receive the script from the producer. I've voiced for major corporations like Microsoft right down to the Mom and Pop video business. My private, project studio sits on a very quiet creek setting and is the ideal location to voice from. I thoroughly enjoy what I do and have had the opportunity to work with some very talented folks. Nothing delights me more than when a producer hears the voice over I've delivered and says, "Nice job. Exactly what I was looking for."

I was hired to voice four episodes of "Animal ER Houston." The shows are without professional actors and unscripted. So, there's a wonderful sense of spontaneity in the episodes. From a voicing stand point, I did not see the videos that my voice would be matched to before recording, so all my cues came strictly from the copy, and from some brief direction from the producer beforehand. You can watch the episodes here, but be warned, if you're an animal lover like I am, you might be reaching for the Kleenex. The episodes open with a brief spot for the Houston Zoo voiced by a young female, and then me.